During the last 50 years there has been a steady increase in the incidence of all forms of peripheral vascular diseases. The gradual improvement in our lifestyles has been a major contributory factor to the formation of these diseases. The various forms of rehabilitative treatment methods introduced during this time have brought only minor improvements to some of these conditions. Moreover, there has been a steady increase in sport activities among amateurs and professionals, bringing with it the associated problems arising through injuries.
These problems are not only restricted to the "professional” athletes. The treatment of these unassociated medical situations have several things in common:

l. The indications within the general diagnosis are multiple.

2. There is a need for an effective, non-invasive treatment modality that can be easily utilized.

3. This form of treatment modality must be acceptable to the majority of patients treatable.

4. The treatment modality must be cost effective not only to the recipient but also to the administrative environment purchasing it.


How do we then treat the preceeding conditions at present?

Peripheral vascular disease is being treated with a host of pharmaceutical medications of one sort or another. The physical rehabilitation of these patients tends to be a slow and sometimes unsuccessful process. At times, the condition is discovered too late and conservative therapy cannot all by itself battle these conditions. Various physical treatment modalities have surfaced over the past years, each one unfortunately having its own major contraindications. For some time applications of vacuum type systems were tried with limited success although the application of vacuum has been appreciated for over 3000 years. Various manufacturers then followed down the path of the application of pressure type systems again with their particular drawbacks. Finally, some manufacturers have approached the treatment of these conditions by alternating first the vacuum and then the pressure effect on the body.


Recently, other forms of physical therapy equipment have been introduced. These utilize the effects of electro-therapy, which may have some effect on the aforesaid conditions, but initially we should list the following considerations before setting out to develop such a new treatment modality.

2. It must be safe to the organism being treated.

3. It must have a minimum of contraindications to its application.

4. It must have technical proof as to its application.

5. It must have substantiated scientific and clinical research to back it up.

6. Its mode of action on the organism should be known.

These were the principle considerations made before the design of the Vacusac Treatment System was undertaken.


We have followed these criteria very carefully to produce what we and many of your colleagues in various medical establishments in Europe believe to be one of the most significant breakthroughs during this century.


As we have mentioned previously the application of vacuum in an enclosed system has been known for over three thousand years and researchers have gone further by alternating it with pressure within the closed system (Vasotrain. Vasculator), but have each time stumbled across the problems of contraindications for a large number of treatable patients because of other complications.


We at Vacusac decided to travel down another road.
We wanted to find a way of combining the beneficial effects of vacuum and pressure simultaneously within the same system and by controlling the system to create a pumping-effect within the organism.


It was also our aim to improve the function of the microcirculation and bring about a redistribution of available oxygen within the system.


The first thing we had to do was to test the validity of our theories and to do this we enlisted the assistance of the Institute of Technology in Denmark to check our system independently to ensure that we were in fact creating the effect we were stating.

This being proved, the first objection that we encountered was:

To check this out, we approached both the University of Copenhagen (Denmark) and the University of Liverpool (England) to undertake extensive medical research to see if there could be any possible problem. Both of these respected institutions found independently that there were no significant changes occuring in heart rate, arterial blood pressure, cardiac output nor respiration during Vacusac treatment and that the system had no harmful effects on any of the important physiological functions of the body.


The second objection raised was:


ls VACUSAC a beneficial treatment at all?


With the backup of the results from over 100,000 treatments, it is interesting to note that we have never experienced any side effects to the Vacusac treatment process whatsoever!


The final objection raised was:

What is the mode of action of VACUSAC?

This is the point where the Vacusac Treatment System streaks out in front in comparison with other treatment modalities. Thanks to the long and painstaking research done by Prof. Nikola Dekleva at the University of Belgrade and Head of the Eastern N.A.S.A. research laboratories, he discovered the following facts about the method of action of the Vacusac Treatment System.


The object of Prof. Dekleva’s first research was to look at the effect of the Vacusac on the perfusion of oxygen and carbon dioxide in the peripheral tissues.
His interest in this very important area was aroused during his involvement in taking measurements on behalf of a clinical study on Vacusac that was being conducted at another hospital centre. The results of his research showed that in virtually all of the cases he investigated, he found a substantial increase in the level of oxygen perfusion in the peripheral tissue and a substantial decrease in the level of carbon dioxide perfusion in the same tissue. To further support these findings Prof. Dekleva conducted an in depth experiment using monkeys to quantify his measurements and also to further investigate if there had been any distortion in the cells, platelets etc.
So now we knew that the Vacusac was causing a redistribution of oxygen from the proximal areas of the body to the distal areas of the body.

Al this point Prof. Dekleva decided that if the system was creating these effects, then he should also look at what was happening at a cellular level because, when you are increasing the distribution of oxygen to the extremities this does not imply that the cells are in any shape to absorb the extra nutrition of oxygen.


Thus Prof. Dekleva began his second experiment.
The purpose of this experiment was to measure the power of diffusion of a material through a cellular membrane. The membrane he chose was a placental amniotic membrane and he then designed a diffusion chamber which would be placed on either side of the membrane. He then diffused Iodine J125 through the membrane and measured the diffusion kinetic (force), first without Vacusac and then with Vacusac connected. The results were astonishing:
there was approximately an increase of four times in diffusion kinetic (force) created through the membrane when the Vacusac system was applied


So here we have a totally unique new treatment modality for treating what?

The scientific research completed, preliminary results from research projects in hospitals and universities all over Europe, compared to practical experience from more than 200 hospitals and clinics, have beyond any reasonable doubt proved the following indications for the Vacusac treatment: 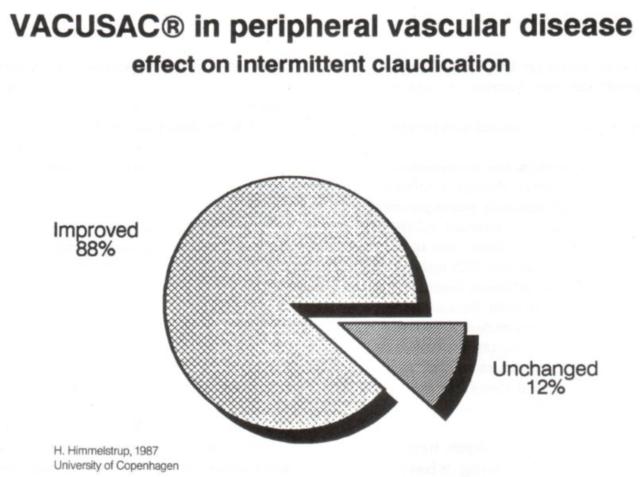 Therefore, the Vacusac Treatment System must seriously be considered as the answer in the successful treatment of a whole range of cardiovascular diseases, sports medical conditions and traumas. Not only in a remedial role but also as a preventative and rehabilitation method.


The Vacusac Treatment System will find itself situated in any and all of the following facilities:


One of the optimizing factors of this notion is that the Vacusac Treatment System offers many benefits:

Inexpensive acquisition
Cost effectiveness in operation
Wide base of application

and in some cases the reduced period of rehabilitation of just a single patient has justified the Vacusac Treatment Systems investment.

A presentation of the scientifically
documented effects of VACUSAC® treatment

by the Vacusac Research Laboratories

The VACUSAC equipment offers the possibility to affect the majority of the body surface with alternating hyperbaric vacuum, and this new treatment modalty has shown remarkable results in a number of scientific investigations.

During VACUSAC treatment subjects are dressed in a hygiene bag, having placed their feet in a pair of felt boots. A layer of felt is secured around the body, and a plastic bag is pulled up to the thorax. Head, neck and shoulders can be treated in a similar manner using the “hood” and "cups", which are a part of the treatment system.

The technical properties of the VACUSAC equipment have been thoroughly tested at the Institute of Technology in Copenhagen, Denmark. These tests have confirmed the presence of the vacuum levels and vacuum modes as claimed by the manufacturers. The tests have also provided a model explaining how it has been possible to attain a combination of hyperbaric vacuum on different points of the body surface through the unique construction of the VACUSAC equipment. 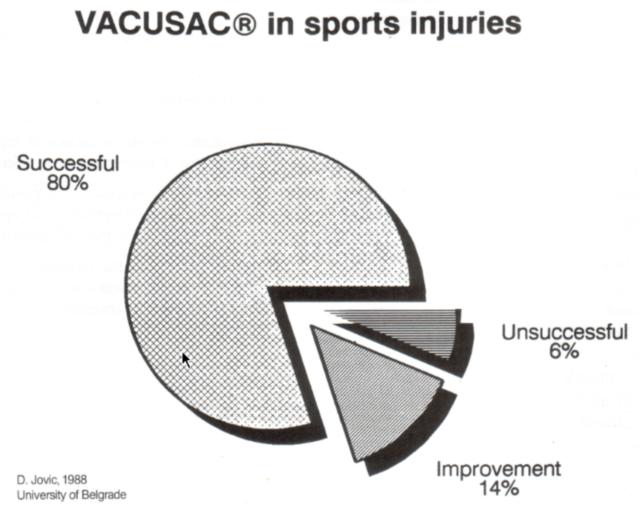 The first studies made on healthy subjects have shown that the VACUSAC equipment does not produce potentially harmful effects on important physiological functions. Thus, no major changes are seen neither in heart rate, arterial blood pressure, cardiac output nor in respiration during VACUSAC treatment. 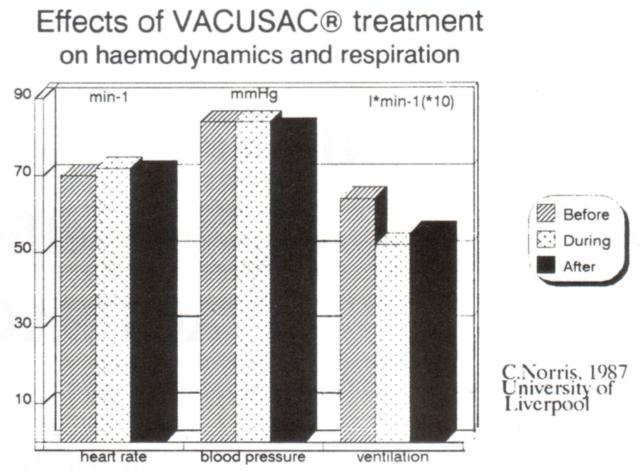 Several studies on the effect of VACUSAC treatment on peripheral vascular diseases have shown remarkable results. Approximately 9 out of 10 patients with intermittent claudication of lung duration acquire a significantly increased walking distance, and one out of three patients are totally relieved of their incapacilating symptoms.


Effects of VACUSAC are documented by scientific research

VACUSAC is beneficial in vascular disease 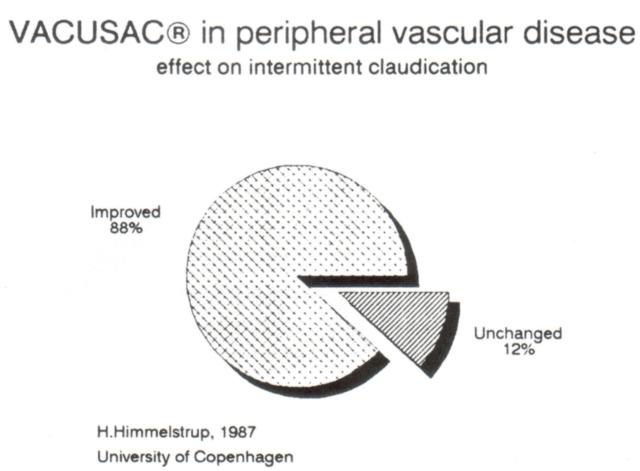 The scientific studies on the effects of VACUSAC treatment on sports injuries have also provided extraordinary results. One study, which included more than 300 sports injuries has shown, that the overall duration of treatment is remarkably reduced with the VACUSAC equipment.


VACUSAC is beneficial in sport injuries 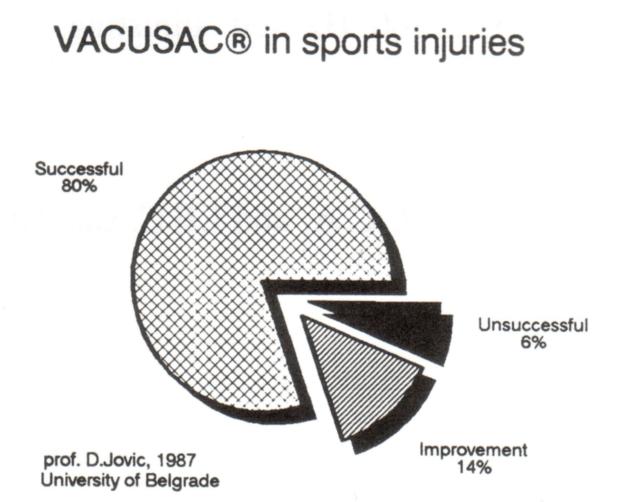 Does VACUSAC affect other diseases?

VACUSAC treatment has an impressive effect on many diseases, but only those in which the effects have been documented by scientific studies are mentioned.

The effectiveness of the VACUSAC equipment is likely based on a removal of accumulated interstitial fluid through the hyperbaric vacuum. This removal of fluid would improve the microcirculation, thus normalizing the metabolic state in diseased areas. This hypothesis is currently being thoroughly investigated, and the preliminary results are compatible with the theoretical considerations.


Does VACUSAC have side effects?

The scientific investigations performed so far have not registered any side effects, and have thus not provided any contraindications to the use of the VACUSAC equipment.

However, as a precaution it is recommended not to treat with Vacusac for 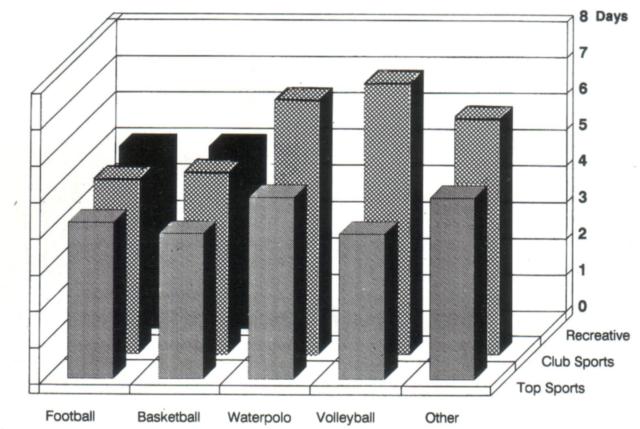 
Research material obtained from international sports competions where more than 500 athletes received VACUSAC treatment for sport injuries have shown a remarkable reduction in recovery time. The mean recovery period was reduced to only 5 days.
Therefore, injuries sustained during your training period will not necessarily force you to alter your training schedule.

A VACUSAC treatment shortly before a competition will improve the metabollsm of the muscle cells and increase the energy level with several percent.


2 things are necessary in any sport to obtain a maximum result:
- that the form curve peaks at the time of performance
- that ALL muscles in the body have optimum function during the competition

VACUSAC® therapy helps you with both !